Alaska a Free and Independent Nation=State

The corporate State of Alaska was granted statehood by the Corporate UNITED STATES INC. on January 3, 1959 after land usage rights being purchased from the Russian Empire in 1867. After the UNITED STATES INC. purchased Alaska from Russia, it was set aside and was considered as a military district. Most of the military activities and military training took place in Alaska. The status of Alaska was upgraded in 1884 from a military district to a judicial district. Clerks, judges, marshals, and other officials were appointed by the federal governmental services corporation to help run and manage the Alaskan territory. The reason Alaska has no counties is because the land owners was unknown therefore Alaska had to use boroughs.

In 2019, Alaska remains a corporation and a fiction. We The People on this land known as Alaskan settlors have yet to claim the land and declare to the world that Alaska is a settled de jure nation=state. A minimum of 30 Alaskan settlors are required to assemble and draft the Alaska Declaration of Settlement of a nation=state. These 30+ settlors in assembly must draft a state Covenant similar to the lower 48 state Constitutions. Why a Covenant? Reference Bible verse Isaiah 49:8. These 30+ settlors must hold an election to fill the de jure seats required for self governance. A drawing must be held for 25 grand jury members and 2 alternates for the state level grand jury. A record must be maintained as a continuous unbroken chain from the first gathering in assembly through all future meeting sessions. Notice must be given far and wide. Instructions to de facto corporation actors/employees to be given after notice rebuttal time expires.

November 5th 2020 We the Settlors on the land known as Alaska have declared our settlement of Alaska a Free and Independent Nation=State. Alaska settlement notice was Published in the legal notices section of the Fairbanks and Anchorage papers for the 2nd, 3rd, and 4th Sundays of November 2020. No rebuttals. We the Alaskan people in assembly have redressed our grievances of the destructive behavior of the Services Contract Administration and deemed it necessary to elect our offices, adopt our Operations and Functions document, and draft our Covenant for Alaska a Free and Independent Nation=State as the trust with the descriptive Metes and Bounds as a prepetual living document to form ourselves a Republican form of Constitutional Government in harmony with the Declaration of Independence 1776 and Bill of Rights 1791 as is our right to do.

We do not intend to join any affiliations with IMF, World Banks, United Nations, Federal Reserve or any=all such organizations. We are not affiliated with the Republic for the united States of America= RuSA, American States Assemblies, Lightforce, Lifeforce, Gforce, Beacon37, TROH, GPO, Union States, or any other organizations seemingly representing states. We revolt and remain belligerent and independent against all foreign alleged encumbrance=claims associated with the corporate United States Incorporated and it's corporate franchise states and others, as debtors in every=any circumstance past=present= future contracts, known=unknown alleged to hold private individual sentient, flesh and blood, living beings as collateral for same through fictional established "NAMES", governmental trust, religious trust, taxation, fees, permits, fines, ordinances, licensing, franchising etc., and unlimited other implied contractual sources as so brought forth by agents and agencies affiliated with the same; and corporate entities Internationally and Worldwide, without full knowledgeable=disclosure and consent to=of each and every individual.

Send email to This email address is being protected from spambots. You need JavaScript enabled to view it. for inquiries or for Alaskans to get involved. 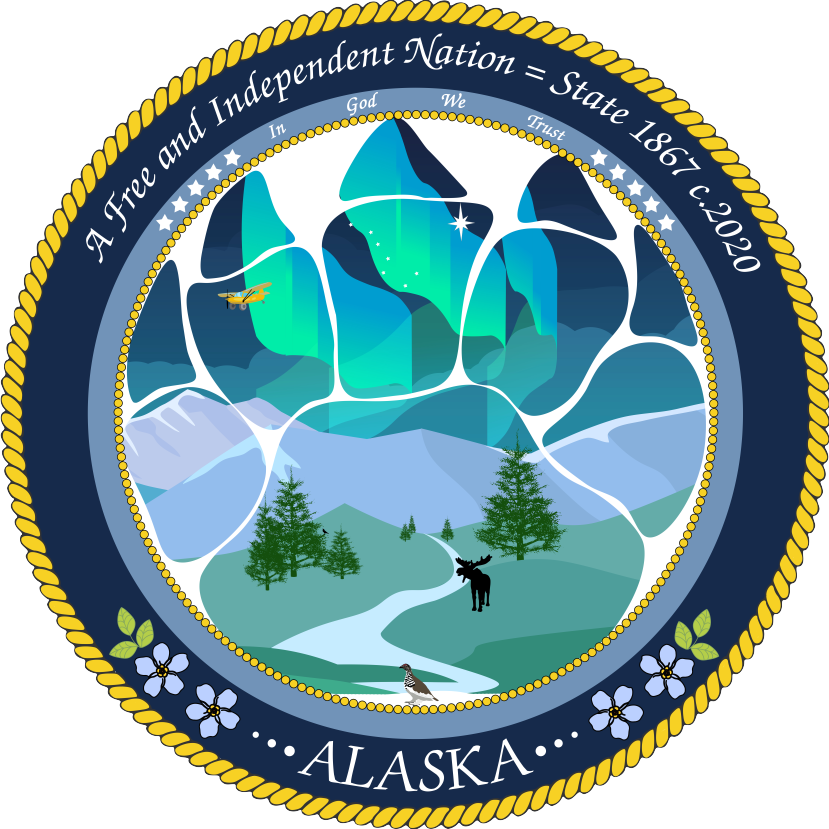